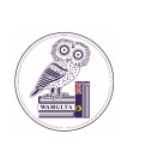 The West Australian Modern Greek Language Teachers’ Association Inc. (WAMGLTA)  turned four on 24 August 2020, making this my fourth consecutive year as its inaugural  Chairperson. I am proud, therefore, to be writing this annual report for the 22-strong  membership of the Association.

The challenges of 2020 affected everyone and WAMGLTA was no exception. Shortly after  our Annual General Meeting on Saturday 7 March, we fortuitously held our first regular  meeting on Saturday 14 March. However, this turned out to be our last face-to-face gathering  for a full three months due to COVID-19. Hence, our subsequent follow-up face-to-face  meeting was on Saturday 13 June. Thereafter, we held another two meetings; one with only  the Executive Committee present (10 October), and the other open to all WAMGLTA  members (14 November). Observing social distancing requirements, we managed to deal with  business effectively and efficiently despite the fewer in-person meetings held this year. Of  course, there was online communication held in between meetings with members of the  Executive Committee to ensure that our targets for 2020 were met.

As such, and despite the stranglehold of the pandemic, WAMGLTA not only achieved its  goals for 2020, it also managed to enjoy a year of firsts! Listed below are some of our  inaugural achievements:

Executive Committee Meetings and our Inaugural Quarterly Newsletter A well-timed decision this year was to hold meetings with the Executive Committee members  only, and to inform our members of outcomes and activities through a quarterly newsletter.  This decision held us in good stead for social distancing measures at our face-to-face meetings.  Despite the COVID-19 interruption to our regular schedule, we managed to produce two  WAMGLTA Newsletters, and two separate articles written by me; one on the success of the  WAMGLTA Speak Greek in June Competition, and the other on the PTCWA Award and our  entry to the MLTAWA (see detail below). We look forward next year to more written  communication with our members through our newsletters, the initiative of which came from Executive Committee member, Mrs Catherine Papanastasiou.

In 2020 our membership increased to 22 paid members, higher than in previous years. We  hope to grow our membership further next year, strengthening our Association in numbers.

A much-awaited initiative has been a website for WAMGLTA and we are proud to say that it  was achieved in this most challenging year! Perhaps because of the extra time spent online in  2020, and due to the expertise of its designer and web-master, Executive Committee member, Ms Nina Battalis, it became a reality. A sound start has been made to our very own website  (https://wamglta.weebly.com), which includes a home page, along with tabs for our blog,  competitions, committee, contact details, and annual reports.

Acknowledgement of WAMGLTA from His Eminence Archbishop Makarios of Australia The new website made it possible for WAMGLTA to articulate its support of His Eminence  Archbishop Makarios of Australia during a time of crisis earlier this year. By posting our statement of support on the website, our Archbishop was able to access the statement and, in  turn, write a letter of heartfelt gratitude to the Association. The letter can be found under the  ‘Blog’ tab.

Sponsor for the Prizes of the WAMGLTA Speak Greek in June Competition Another first for this year included having a sponsor for the prizes for the WAMGLTA Speak  Greek in June Competition. Dr Con Berbatis and family became our generous sponsor for the  book voucher prizes. As a result, we were able to create a new ‘Prize for Effort’ as well as having the existing ‘Winning Entry Prize’ for each of the categories on offer. All participating  students, therefore, won a prize this year.

Despite COVID-19 and the shift to online learning, our annual Speak Greek in June  Competition attracted 14 participants from two schools; St. Andrew’s Grammar (12  participants) and Immaculate Heart College (2 participants). The students ranged from Year  3 through to Year 10, and the topics were many and varied. There were 10 ‘Winning Entry Prize’ recipients and 4 ‘Prize for Effort’ recipients. Thanks are extended to WAMGLTA  members, Mrs Katerina Reklitis and Mr George Anastassiadis who prepared the students for  entry to the competition at the respective schools.

Certificate of Outstanding Performance by an Association from the PTCWA On Wednesday 18 November, WAMGLTA was represented at the 2020 PTCWA Showcase  Celebration Event at the State Library Theatre in Northbridge by me as Chairperson, Ms Maria  Svarnou as Secretary, and Ms Nina Battalis as one of the Executive Committee members. At  this event, WAMGLTA was introduced to the other associations via a brief PowerPoint  Presentation, outlining its main objectives. WAMGLTA was then acknowledged with a  certificate for being an “Outstanding PTCWA Member Professional Association”. Whilst  individual WAMGLTA members have received a similar certificate in the past for their work  on the Committee, it was a first for the Association to be acknowledged holistically in this  way.

Membership to the Modern Language Teachers’ Association of WA (MLTAWA) On Saturday 28 November, WAMGLTA was welcomed officially as a new member of the  Modern Language Teachers’ Association of Western Australian (MLTAWA), both at the Annual General Meeting and later at the 90th Birthday Celebratory Event. WAMGLTA is now  a member of the oldest Language Association and the oldest Learning Area Association in  Australia! We were warmly welcomed in the presence of many dignitaries and guests,  including WA Minister for Education and Training, the Honourable Sue Ellery MLC; and the  Honourable Consul of Greece, Mrs Georgia Karasiotou.

Aside from the inaugural achievements listed above, WAMGLTA was invited once again by  the Honourable Consul of Greece, Mrs Georgia Karasiotou, to attend the wreath-laying  ceremony for the commemoration of OXI Day. I represented the Association at the event on  Sunday 25 October.

Looking ahead, our Annual General Meeting will be held on Saturday 13 March 2021 at  1.30pm at The Evangelismos Greek Language School, where the Treasurer will also table the  Financial Report for 2020. The event will be open to the public, inviting existing members to  renew their membership and new members to join. Our special focus next year will be the  200th Anniversary of The Greek War of Independence. We will mark this event by making it  the theme of our WAMGLTA Speak Greek in June Competition.

I take this opportunity to thank the members of the Executive Committee for their wonderful  work this year: Secretary, Ms Maria Svarnou; Treasurer, Mr Nick Gile; and Executive  Committee members, Mrs Catherine Papanastasiou, Ms Nina Battalis, and Mrs Irene Starr.  You have been a strong support team throughout the year and for this you are acknowledged  and thanked. I would also like to thank all our members who, by their membership alone,  demonstrate support for the objectives of WAMGLTA, which was set up to assist and advance  the teaching and learning of Modern Greek in WA.

View all posts by Julia Mueller →