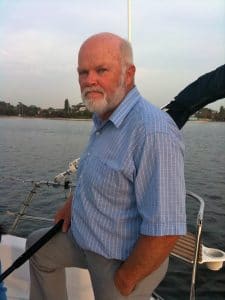 Nick Norris was a leading educator with a distinguished career as French teacher, school principal, researcher, and consultant and director of the company, Collaborative Systemic Change. Throughout his career, he was a strong advocate for languages education and worked closely with individual teachers to assume leadership and plan strategically to strengthen the position of Languages within their schools. He is well remembered in the languages community for the Professional Learning he co-ran for languages teachers called “Leading in Languages” with his wife Dr Lindy Norris, with whom he shared a passion for teaching and learning. For many aspiring leaders in Primary and Secondary across all sectors, this PL, and listening to Nick’s well-crafted stories of his family life, army experiences and sailing, directed them as he might have said himself, to charter new waters.

Nick had a unique and powerful way of implementing and supporting change and relished facilitatory and change management work. Through his consultancy projects he provided expertise on leadership in a range of contexts, including indigenous communities, particularly where Australian languages were being revived.

Nick was former President of the Modern Language Teachers Association of Western Australia Inc. (MLTAWA) and convened the first AFMLTA National Conference ever to have been held in Perth in 1982.

In recognition of his contribution to languages education the Modern Language Teachers Association of Western Australia recently established the biennial Nick Norris Memorial Lecture. The Association cordially invites members of Norris family to attend the biennial Lecture and seeks advice from Nick’s wife, Dr Lindy Norris, on presenters to discuss the topic of leadership. In 2016, Professor Gary Martin, CEO of the Australian Institute of Management of Western Australia delivered the inaugural Nick Norris Memorial Lecture as a plenary on Saturday 20 August at the MLTAWA Conference.